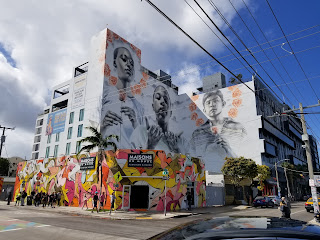 After two weeks in North Miami Beach, we packed up the car and headed for four days at the Aloft Hotel in Coral Gables, just off the Miracle Mile.  It was a rainy Saturday morning and we decided to stop by the Wynwood District to see what was happening.  We had seen the district from a tour bus two years ago and I was fascinated by the wall art.  The on and off again rain didn't hamper us nor the hundreds of others who were spending Saturday there.  The walls were even more vibrant than I remembered them.  We spent a couple of hours strolling through the district looking at the walls and shops and watching the people whose number increased as the weather improved.  Wynwood was a warehouse and commercial district which has experienced a transformation.  There are three districts in Wynwood:  Art, Fashion, and Technology. 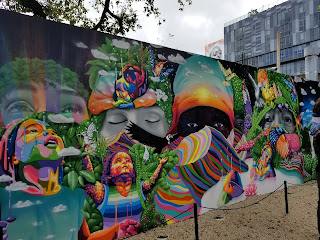 The Wynwood Walls are what draw people.  They are vibrant and are refreshed and even repainted every December.  The late urban developer Tony Goldman conceived the walls in 2009.  "His idea was to revitalize the neighborhood by turning warehouses into works of art. According to the Walls' website, artists featured at Wynwood Walls include Shepard Fairey, Okuda San Miguel, The London Police, Stelios Faitakis, Clare Rojas, The Date Farmers, avaf, ROA, Ron English, Jeff Soto, Logan Hicks, b., PHASE 2, Joe Grillo, COCO 144, Gaia, Vhils, Interesni Kazki, Brandon Opalka, Friends With You, DALeast, Faith 47, Santiago Rubino, Daze, Maya Hayuk and Lakwena.  The Walls were cited as a tourist destination for family fun by Palm Beach Illustrated in 2018.  The Walls are curated by Goldman Global Arts, an art dealer that has a gallery inside the wall area."  (Wikipedia) 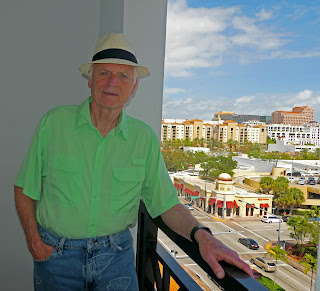 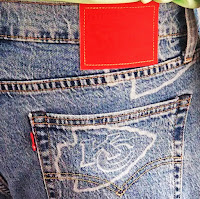 During our stroll, we spotted a Levi's Pop Up Store.  It was set up in a gravel parking lot last December and would be taken away in April.  The major attraction was the shop where you could selected specially designed jeans.  When I saw that the Kansas City Chiefs logo was an option, I couldn't help myself and spent more money than I ever thought possible for a pair of jeans.  I imagine they sold a lot of these during the Super Bowl since the 49er's logo was also an option.  They haven't sold many of those after the Super Bowl.

You can click here to view the photo album of our time in the Wynwood District.  Or you can play the video below. 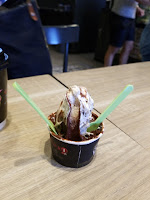 After sharing a magnificent bowl of gelato, we made our way to Coral Gables to begin our four days there.  We stayed at the Aloft Hotel, a Marriott property.  "Coral Gables was one of the first planned communities, and its planning was based on the popular early twentieth century City Beautiful Movement. It is infamous for its strict zoning regulations. The city was developed by George Merrick during the Florida land boom of the 1920s. The city's architecture is almost entirely Mediterranean Revival style, mandated in the original plan."  (Wikipedia)  Merrick designed the business district to be only four blocks wide.  It is bisected by Coral Way which is officially named The Miracle Mile.  It is filled with restaurants with sidewalk seating, specialty food shops and, for some reason, numerous bridal shops.  It is pedestrian-friendly and we spent most evenings and mornings walking to and from our hotel.

On Sunday morning, we decided to go to Mass at the Jesuit parish downtown, Gesu Church.  The Jesuits founded the parish in 1896 before Miami itself was founded.  In 1922 the current building was constructed.  It is on the National Registry of Historic Places and was recently renewed.  The New Orleans Province of the Society of Jesus founded and staff the parish until 2004 when the Province of the Antilles took over.  The provincial headquarters is in the Dominican Republic and it serves the Dominican Republic, Cuba, and Miami.

After Mass, we drove a few blocks to Bayside Marketplace where we walked around amid shops, restaurants, musical performances, and a lot of people having a great time.  Marilyn walked only a few yards before she spied a shop with some clothing that caught her eye.  She spent close to an hour while I waited outside, did some more street photography and called family members.  You can click here to see more photos in a Google Photos album.

We went back to the hotel to rest up a bit before our big night in
Little Havana.  Our friend, Angel Arza, had moved to Miami about eight years ago.  We met him in Rochester where he attended St. Mary's Church.  Angel entered the U.S. as a refugee from Cuba.  He is a medical doctor and had practiced as a pediatrician in Santa Clara, Cuba.  He participated in the Catholic Refugee program and that was how ended up in Rochester and attending St. Mary's.  After a couple of years in Rochester, he moved to Miami although he claims not because of the weather.  He still says he liked the winters and even misses them.  He has become a U. S. citizen but unfortunately, he is not able to work as a doctor here.  He applied to several residency programs but was not accepted.  He thinks that his age (45) worked against him.  Like most obstacles in his life, however, this one has not reduced his enthusiasm and positive outlook.  He gained certification as a behavioral therapist assistant and works with autistic children.  He is currently recovering from a stroke he suffered on January 10.  It impacted his right side but he is recovering rapidly and is walking unaided but only the barest hint of a limp.  When I asked him how he is managing as a right-handed person, he cheerfully replied that he was a switch hitter as a baseball player and so is having little problem writing left-handed.  All this was said with a big smile and twinkling eyes.

We spent almost three hours with him on Calle Ocho, the main restaurant and entertainment street in Little Havana.  He took us to Guantanamera where we enjoyed LOUD music and ate medianoches, a traditional Cuban sandwich--always cut on the diagonal--which is typically served in Cuban bars and clubs around midnight--hence medianoche, middle of the night.  We then walked both sides of the street.  The slide show below gives you an idea of what we observed.


You can go here to view the album of the photos from that night. 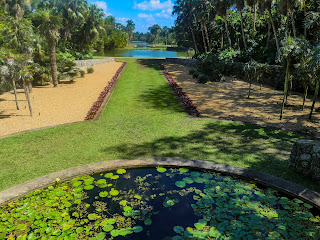 On our last day in Coral Gables, we went to the Fairchild Tropical Botanic Garden.  This "is an 83-acre (34 ha) botanic garden, with extensive collections of rare tropical plants including palms, cycads, flowering trees, and vines....The garden was established in 1936 by Robert H. Montgomery (1872–1953), an accountant, attorney, and businessman with a passion for plant-collecting. The garden opened to the public in 1938. He named it after his friend David Fairchild (1869–1954), a significant plant explorer. Fairchild's travels brought more than 20,000 plants to the United States, including mangos, alfalfa, nectarines, dates, horseradish, bamboos, and flowering cherries. David Fairchild retired to Miami in 1935, but many plants still growing in the Garden were collected and planted by him, including a giant African baobab tree. Montgomery pursued the creation of a botanical garden in Miami. He purchased the site, named it after Fairchild, and later deeded it in large part to Miami-Dade County." (Wikipedia) 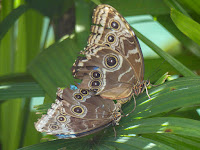 We found an unexpected treat in the butterfly exhibit, Wings of the Tropics.  I took some photos as you can see but a video is the only way to capture images of butterflies.


You can go here to see more photos of Fairchild.

We are now in Orlando enjoying Disney World and Sea World.  More about that in the next blog which I will send out after we are back home. 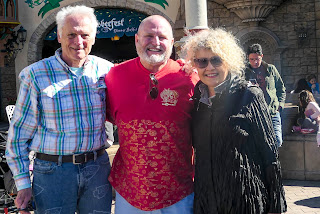 Our final week in Florida was back in Orlando.  We had originally planned another two weeks there visiting family and friends in Naples, Fort Myers, Sarasota, Jacksonville, and Greenville SC as we made our way back home.  But it seemed better to get back home so Marilyn could be spending time with her 102-year-old mother.  As it turned out, that was a good call since we got word as we were driving back that she had taken a turn.  We were able to get Marilyn on a flight to Buffalo from Savannah.  Mom rallied and is stable, interactive and in good spirits.  I continued the drive home.  I spent the first night with Liam and family in Charlotte and the second in Pittsburgh where I am beginning this post.  I will drive to Buffalo Friday morning.  Depending on the situation we will probably be home in Rochester that night.

But back to Orlando.  We spent the week in a resort about 30 minutes outside Orlando and about the same from the Disney World attractions.  It worked out well for us and …
Read more