February 12, 2020
On February 1 we left Rochester to spend seven weeks away from winter in Florida.  The weather in Rochester had been relatively mild for winter and when we left it didn't feel all that wintry.  However, within a week, our decision to flee was vindicated by a winter storm that was predicted to drop 11 inches of snow with temperatures in the single digits.  By that time, we were in Orlando where we enjoyed clear weather in the seventies.


But before that, we spent two days in Centreville VA near Dulles Airport with my brother Tom and his wife Sarah.  It was an easy seven-hour drive there with clear weather and gradually increasing warmth.  We were treated to a delicious dinner on our arrival and enjoyed visiting.  While we had seen them two weeks earlier in Kansas City at our sister Louisa's funeral, we really had not been able to just relax two of our favorite people.

However, the big event of our visit was to watch the Super Bowl with two rabid Chiefs fans.  Sunday morning we went to the local YMCA to work out and I was decked out in my Chiefs gear.  Later that day, the girls went to Leesburg for lunch while Tom and I watched the NFL films story of the Chiefs victory 50 years ago in Super Bowl IV.  We hoped that the boys would deliver another victory.  And of course, they did in what has become a typical come from behind bolt of lightning from Patrick Mahomes.

Monday morning after a short night's sleep, we were on the road again headed to Charlotte to stay with Liam and Marcie.  The drive south through the Shenandoah Valley was clear and beautiful even without any green.  Even the traffic through Charlotte--they live in south Charlotte near Ballantyne--was easy and quick.  They have completed most of the improvements headed into the city.  We stayed with them that night and the next day.  With both boys, Liam Jacob (U. S. Merchant Marine Academy) and Aidan (UNC-Wilmington) away at college, the household seemed different.  Of course, one big difference was that we got to sleep in Aidan's bed in his well-ordered bedroom.  We got to spend some time with the girls, Marin and Eibhlin, but not as much as we wanted.  They had to go to school.

On our drive down, Marilyn experienced an issue with a tooth.  After Marcie got us into their family dentist, she learned that one of her molars had split and would need to be extracted and an implant installed.  Fortunately, the dentist said this could wait until we returned home.  He did take out the interior part of the tooth and then sealed the exterior to the filling.  So far that has held and I think we will make it to March 20.  It was about then that we learned of the impending snowstorm back home in which we took an allowable if mixed pleasure.  What's that German word  Oh, yes, schadenfreude.

After a somewhat longer drive of eight and a half hours, we arrived in Orlando to stay with our friends, Ishrat and Musheer Hussain.  Marilyn and Ishrot have known each other for over 20 years.  They worked together at BOCES2.  Musheer practiced for 40 years as a general surgeon in Brockport.  They both retired and moved to Orlando to be near two of their three children and, of course, to not be present for Rochester winters.  They came to America when Musheer did his internship at Cook County Medical in Chicago and to Rochester for his surgical residency at Strong Hospital of the University of Rochester.  Ishrat is from Pakistan and Musheer from India.

They are committed and observant Muslims and it is always edifying to be with them in their home.  They express the Muslim value of hospitality in every way.  They both took evident joy in cooking for us and making sure that we were comfortable. They both pray five times a day, Musheer at the nearby mosque and Ishrat at home.  They both attend classes and weekly worship at the mosque.  Ishrot also teaches a class on the Koran.  Our friendship with them has deepened our understanding of Islam and its values.  Any time I hear someone talking about the dangers of Islam, I ask them if they know any Muslims.  The typical answer is no.  I then share our experience with Ishrat and Musheer.  It turns out they do not know much if anything about Islam and as a result they are subject to manipulation by people who take advantage of our natural human fear of the unknown.

Over 40 years ago, Musheer came to America because it represented freedom, opportunity, and acceptance.  He was one of 11 children and several of his siblings also left for America, Canada, and England.  He and Ishrat are American citizens.  He is no less an American than I am and I am no more than he.  that's the great thing about America.  We all came from somewhere else and once we are here, we're Americans.  It is painful to realize that if Musheer were making that decision to relocate today, it would not be a simple one.  So much has changed in 40 years.  It would be a much more complicated decision.  There is sadness in my heart about that. 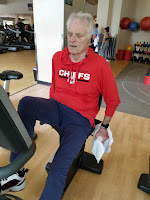 We also checked into the nearby YMCA for our daily exercise.  It is a beautiful and fully featured facility although lacking an indoor track which apparently only frigid Northern YMCAs have.  I wonder why.  I continued to wear my Chiefs gear and kept getting thumbs up from passing strangers.  It happened here when a guy congratulated me when he saw the shirt.  he said he was pulling the Chiefs al long as they weren't playing his team.  When I asked him which team that was, he said Denver Broncos.  So I guess all Bronco fans don't hate the Chiefs.  Hear that Liam?   I was so engaged talking to him about Chiefs and Broncos that I failed to notice he was wearing a Trump 2020 cap.  Marilyn noticed but failed to take what would have been an awesome photo. 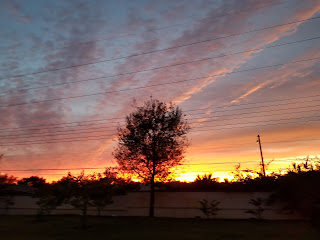 We were treated to our first awesome sunset while we were in Orlando.  Our next stop is in North Miami Beach where we will be for two weeks.  More about that in my next posting. 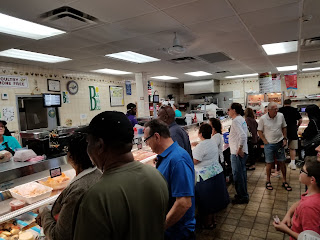 We began our second week in North Miami Beach with a Weight Watcher weigh in in Hollywood Beach.  Emboldened by our positive results, we immediately made for Delaware chicken Farm & Fish Market.  You read that right.  Chicken farm and fish market.  Since 1951 this family-owned market has been providing the best fish, chicken, and meats in the area.  Marilyn learned about it during a fitness class at the Y here.  We had to wait about ten minutes for a spot to open up in the parking lot where a Hollywood police officer was managing traffic.  This was a late morning weekday, no less.  We brought two large salmon fillets, a pound of sea scallops and 3/4 pound of shrimp.  Five delicious meals.  This is a local favorite.  We were glad we found it.


On Sunday, we drove less than ten minutes down to Miami for Sunday Mass at the Cathedral of St. Mary.  In 1958, 16 counties in South Florida were "detracted" from the Archdiocese of St. Augustine to form the Diocese of Miami.  The V…
Read more