We began our second week in North Miami Beach with a Weight Watcher weigh in in Hollywood Beach.  Emboldened by our positive results, we immediately made for Delaware chicken Farm & Fish Market.  You read that right.  Chicken farm and fish market.  Since 1951 this family-owned market has been providing the best fish, chicken, and meats in the area.  Marilyn learned about it during a fitness class at the Y here.  We had to wait about ten minutes for a spot to open up in the parking lot where a Hollywood police officer was managing traffic.  This was a late morning weekday, no less.  We brought two large salmon fillets, a pound of sea scallops and 3/4 pound of shrimp.  Five delicious meals.  This is a local favorite.  We were glad we found it. 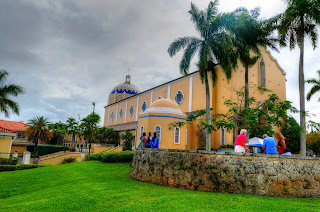 On Sunday, we drove less than ten minutes down to Miami for Sunday Mass at the Cathedral of St. Mary.  In 1958, 16 counties in South Florida were "detracted" from the Archdiocese of St. Augustine to form the Diocese of Miami.  The Vatican selected St. Mary's as the cathedral for the new diocese.  While St. Mary's parish began in 1930, its current building was completed in 1957 and was clearly designed to be more than a parish church.  Read more about St. Mary's here.

Over the choir stalls, known as the presbyterium, is a continuous glass mosaic depicting scenes from the life of Mary.  The artist was Gabriel Loire of Chartres, France.


Go here to see other photos of the Cathedral.

Fr. Christopher Marino, Rector of the Cathedral, presided at the Mass we attended.   While the Mass was relatively formal, his style and presence were very engaging.  His homily was especially well done.   When I greeted him after Mass and told him that, he responded: "I always preach first to myself."  I believed him. 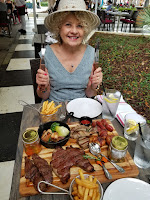 After Mass, we drove over one of the causeways to spend the rest of the day on South Beach having lunch, doing a bit of shopping, capturing some street photos, and walking about.  We had a delicious lunch at Ole.Ole.  I can't remember exactly how many meats were in our shared meal but steak, pork, bacon-wrapped chicken, chorizo sausage and sweet pork bellies come to mind.  As we were waiting for the food to be delivered, we along with several others noticed an uninvited guest in the trees above.  Although hard to tell from the photo, this was a fully grown Green Iguana between four and five feet in length.  Iguanas are not native to South Florida and are, in fact, an invasive species that causes environmental damage.  It is not a protected species except under animal cruelty laws.  Fortunately, our friend did not decide to join us for lunch.

I really am getting into street photography and it was very easy to do on South Beach.  If we had been over on Ocean Avenue it would have been even more interesting.  Even so, I captured almost 200 images which you can view by going here.  Or you might prefer to watch this brief video with a selection of those photos. 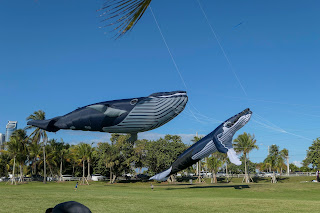 On Monday, we went out for an hour walk along the beach and after lunch returned for a Kite Exhibition.  We didn't know exactly what to expect, certainly not giant whale kites.  But there they were along with many other kites of all types and sizes.  It turns out that the guy flying those two kites had flown down from Newark NJ just to participate in this event.  There are probably not too many places he could that in New Jersey this time of year.  Go here to see more photos.  Here is a three-minute video of the kites. 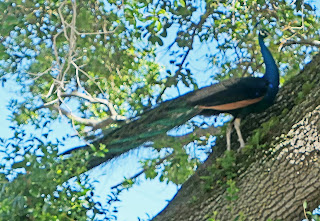 The rest of the week we settled into a nice routine of reaching, working out, visiting the food trucks, going to a movie (1917), shopping and grabbing a nice meal out.  One last interesting experience.  We had a loud and almost raucous early morning alarm from one of our neighbors who fortunately moves around the neighborhood.  We didn't have to deal with the peacock every morning. 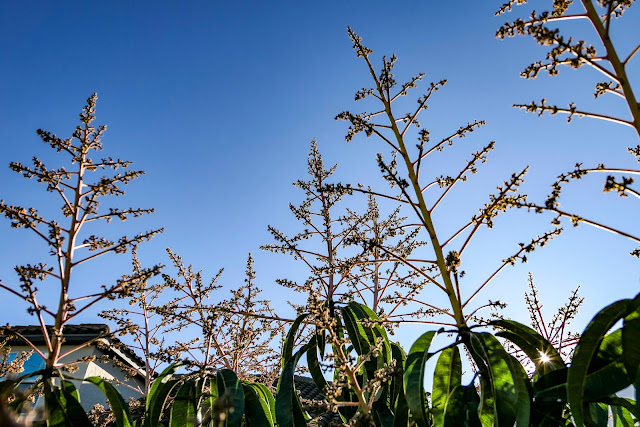 On February 1 we left Rochester to spend seven weeks away from winter in Florida.  The weather in Rochester had been relatively mild for winter and when we left it didn't feel all that wintry.  However, within a week, our decision to flee was vindicated by a winter storm that was predicted to drop 11 inches of snow with temperatures in the single digits.  By that time, we were in Orlando where we enjoyed clear weather in the seventies.

But before that, we spent two days in Centreville VA near Dulles Airport with my brother Tom and his wife Sarah.  It was an easy seven-hour drive there with clear weather and gradually increasing warmth.  We were treated to a delicious dinner on our arrival and enjoyed visiting.  While we had seen them two weeks earlier in Kansas City at our sister Louisa's funeral, we really had not been able to just relax two of our favorite people.

However, the big event of our visit was to watch the Super Bowl with two rabid Chiefs fans.  Sunday morning we …
Read more